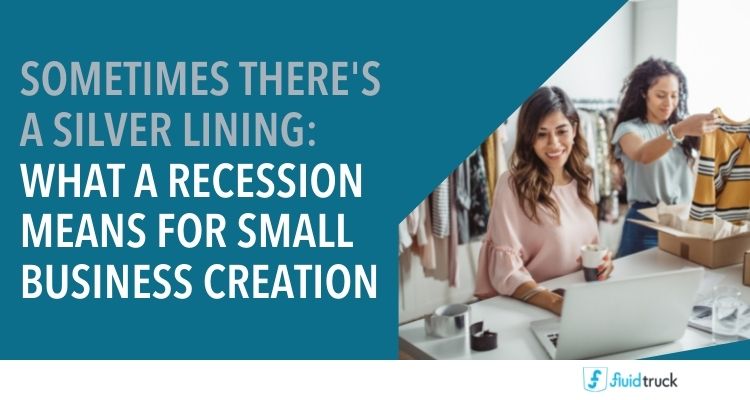 Sometimes there’s a silver lining: What a recession means for small business creation

Inflation, recession, and price fluctuations seem to be buzzwords in our news cycle lately, leading economists to predict a recession in late 2022 at the earliest, stretching into 2023. There is a certain level of fear associated with recession: a natural downturn of the economy that often results in high unemployment, lower consumption rates, and lower profits as prices fall.

The harmful effects of recession are often the focal point of news. However, economists point to recessions as necessary launchpads for some of the most successful companies today. These profitable companies include General Motors, IBM, and even Disney.

Recession as a launchpad for new businesses

Recession can serve as a launchpad for new business growth for a variety of reasons. Here, we’ll take a closer look at why this is the case and how it can benefit your business:

The natural reduction in prices associated with a recession can help budding businesses acquire the raw materials and supplies they need for cheaper than usual.

To accommodate for the recession and encourage spending, interest rates are traditionally lower during a recession. Take advantage of these lower interest rates and invest in your business.

As unemployment rates skyrocket, there are plenty of viable candidates on the market looking for a job. This gives you an edge to find the best-suited candidates for your startup.

Fill gaps in the market with your innovation

Some of the world’s most innovative companies, including Microsoft and many tech giants, were forged out of a recession or economic downturn. Recessions are bound to create problems that consumers will be looking for answers for, allowing entrepreneurs to put their thinking caps on and find the best solution.

In addition to this, your competition is vulnerable and focused on weathering the storm instead of innovation— leading to more room for you to fill this gap. A brilliant example for innovation is Netflix. The leading media company launched its streaming service in 2008, following the great recession in 2008 and the death of video stores.

The timeline to recession

One of the last encounters our economy had with recession was The Great Recession of 2008, spurred on by the housing market crash and economic turbulence for many financial lenders. Just 2 years ago, the pandemic sent the economy hurtling into one of the worst recessions the US had ever witnessed since then, with a record loss of 9 million jobs in 2020. This was double that of the 5 million lost in 2009.

Economists argue that we are not in a recession due to the strong labor market, with jobs growing at 3.7 percent in the past 6 months, which is double to that of previous recessions. While the job market is a strong indicator of the economy’s state, it is still considered a mixed bag because household surveys reveal that there have been “no job gains” in the past few months. Others argue that we are in a technical recession— formed by a drop in consumer spending and domestic investments.

Expanding your business with Fluid Truck

Fluid Truck has been working with small businesses through the ups and downs in our economy, including both times of inflation and times of recession, pulling them away from the overhead costs of owning a vehicle.

Passionate business owners, such as Pauly of Pauly’s Pretzels, sought innovation and inspiration in some of the country’s hardest economic times in 2020. With the help of Fluid Truck, Pauly was able to bring the pretzel to the people and expand his business with Fluid Truck’s affordable and convenient rental solutions.

Expanding your business in an unpredictable economy can be tough, and that is why Fluid Truck is proud to offer rental opportunities to business 24/7, 365 days a year. To learn more, get started with Fluid Truck for business here.