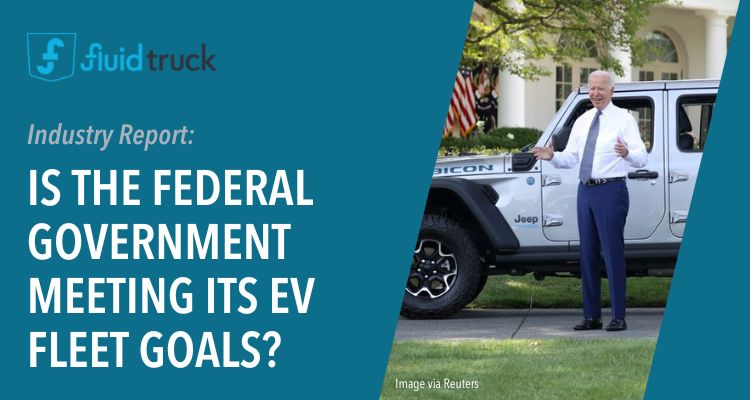 Is the Federal Government meeting its EV fleet goals?

Earlier this year we told you about the road to transitioning gas-powered postal trucks to EVs. Unfortunately, the federal government is lagging on its progress to eliminate gas-powered vehicles from its fleet. Let’s check in on where things stand.

Last year, President Biden ordered federal agencies to only buy zero-emission passenger cars by 2027, and EV versions of any type of vehicle by 2035. Those vehicles are also required to be made in the U.S. What makes up a zero-emissions vehicle according to the U.S. government? An EV or plug-in hybrid, which still has an engine that burns gas.

At the time of the announcement, the White House said in a statement, “the move to zero-emission vehicles will accelerate the advancement of America’s industrial capacity to supply zero-emission vehicles and electric vehicle batteries and create and sustain good union jobs in manufacturing, engineering, and skilled-trades.”

Fast forward to fall of 2022 and the General Services Administration, or GSA, said despite the White House describing the timeline as “on track,” there’s no guarantee that this goal will be met. The GSA is the agency in charge of purchasing two-thirds of the federal fleet, which includes 656,000 vehicles.

This month, the Associated Press provided a breakdown of the vehicles purchased by the federal government so far in 2022. Journalists excluded the post office, which owns about one-third of the federal fleet. The AP found only 3,550 new light-duty vehicles purchased this year were zero-emissions, or about 13%.

The AP found the federal numbers continued to shrink when its journalists analyzed vehicles actually on the road. Many recent purchases will be delayed because of ongoing supply chain issues and some of them could take up to a year to arrive.

So, is the White House being realistic on timeline goals?

The answer is no, if you look at the AP findings. Journalists report it would take years, or possibly decades to switch the government fleet over at the current rate of 35,000 to 50,000 GSA vehicle purchases a year.

What about the plans for an electrified postal service fleet?

Since we last told you about the plans back in February, the U.S. post office said it planned to increase the number of EVs it purchases. That announcement came in July, after President Biden criticized the agency saying it was falling short on the administration’s climate goals.

Originally, the U.S. postal service had a plan for a 20% electric fleet, but over the summer it increased this goal to 50%. The announcement also came after attorneys general from 16 states and the District of Columbia launched a lawsuit against the United States Postal Service saying the agency didn’t do enough to vet clean fleet alternatives.

A spokesperson for the independent agency responded saying, “the Postal Service is fully committed to the inclusion of electric vehicles as a significant part of our delivery fleet even though the investment will cost more than an internal combustion engine vehicle. That said, as we have stated repeatedly, we must make fiscally prudent decisions in the needed introduction of a new vehicle fleet.”

When do some of the EV postal trucks roll out? You could spot one delivering mail in your neighborhood as soon as 2023. The U.S. Postal Service owns 234,000 vehicles in the federal fleet and plans to spend the next 10 years investing in about 165,000 next-generation vehicles, which includes four categories of vehicles: electric, hybrid, plug-in hybrid and fuel cell.