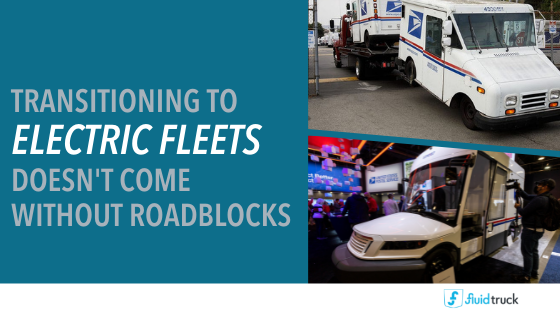 It's More Than Plug & Play: Transitioning to Electric Fleets Doesn't Come Without Roadblocks

When President Biden signed the "Buy America" executive order it was a promise to replace the government's fleet of vehicles with EVs assembled right here in the U.S. The president's goal? He wants federal agencies to phase out buying gas-powered vehicles by 2035 and switch to only zero-emissions cars and trucks. With the government being a major purchaser of vehicles, it's no surprise this effort will be costly and take time. So, let's dig in.

What challenges come with EV adoption for government agencies?

Just this month, the U.S. Post Office announced plans to order up 5,000 EVs for its new fleet. It comes after Postmaster Louis DeJoy was criticized in the weeks prior for hefty spending on gas-powered vehicles. Both President Biden and the EPA criticized the post office for not including enough zero-emissions trucks in its upcoming renewal program. The move led to some calling for the resignation of DeJoy, but his defense was that budget restrictions were holding him back.

Kim Frum, a spokeswoman for the Postal Service, explained in a statement the agency is being pulled in two directions: satisfying the National Environmental Policy act and also staying within its budget. It's not a huge surprise, since a year ago the independent government agency said it couldn't afford a total EV fleet.

“While we can understand why some who are not responsible for the financial sustainability of the Postal Service might prefer that we acquire more electric vehicles, the law requires us to be self-sufficient." she said.

One thing everybody seems to agree on is that the current postal fleet is aging and long overdue for an upgrade. So, that purchase we told you about of the 5,000 EVs for the postal fleet? That's just a drop in the water of what the new fleet will be made up of. USPS has been saying for a year now that only 10% of it's fleet of 230,000 vehicles will be EVs in the years to come. It's simply too expensive for the agency to fork the bill for an all electric fleet, saying it would cost an additional $3.3 billion that is outside of its budget.

"Absent such funding, we must make fiscally responsible decisions that result in the needed introduction of safer and environmentally cleaner vehicles for the men and women who deliver America’s mail," said DeJoy.

If you go to the city website for Denver, Los Angeles, or New York City, you will find sections that lay out their plans for EV fleets. In Denver it's called the "Denver Electric Vehicle Action Plan," in L.A. it's the "EV Master Plan," and in NYC it's the "NYC Clean Fleet Plan." Regardless of the name, each comes with similar challenges.

First - the geographic center of the country. What’s Denver’s plan?

A 2021 map-out of the details points to the city lacking in the number of needed EV chargers. It recognizes the city will need 10 times the current number of charging ports over the next decade to support its goal EV population. This means significantly more port installations each year. To add to it, the city said it needs to do more work in providing EV chargers across the board. Right now, most charging stations are sitting in higher income neighborhoods. The map above illustrates the presence of EV charging stations in different parts of the city, designated by the equity index of each neighborhood. The equity index is part of the metrics that the city of Denver uses to measure access to opportunity.

Next - West coast. What's up with the EV plans in Los Angeles?

The city famous for traffic is also highlighting efforts to slash the number of gas-fueled vehicles from its streets. LA. already has electric buses on the roads, discounted EV car-sharing available to low-income residents, and a growing number of charging stations. With the exciting growth and big goals (the city has a goal to  increase the percentage of zero-emission vehicles on city roads to 25% by 2025, 80% by 2035, and 100% by 2050) also comes setbacks.

In order to make it work, the city's plans make it clear: home charging remains a critical component. It said most EV charging will likely continue at home, where it's less expensive and easier than public charging spots. The city said it will need about 536,000 home chargers by 2030. The idea is for the city to provide more access to home charging for residents through programs. The plan also explains public and workplace charger deployment will need to ramp up fast.

Finally, back East. What roadblocks is EV introduction facing in NYC?

The NYC government has a fleet of more than 27,000 fuel-burning vehicles. That's no small number. As far as the NYC Transit bus fleet, the big challenge is producing an electric grid to keep the buses charged up and on the move, but in an affordable way.

No one’s ordering [electric] buses, unless there’s a specific plan on how they’re going to charge them," said  Lauren Bailey, the director of Climate Policy for Tri-State Transportation Campaign.

New York State is struggling to keep up with EV charging station goals. Just this month an audit by the state comptroller found there's been missed deadlines and nearly half of the state's 62 counties are still without the devices.

“Compared to what was promised, the roll out of electric vehicle chargers has been a disappointment so far,” State Comptroller Tom DiNapoli said.

Many private companies face similar concerns and roadblocks with transitioning to EV fleets. This is where Fluid Truck comes into play.

Fluid Truck is working to break down the barriers of companies accessing electric vehicles. IKEA is taking advantage of Fluid Truck's electrified fleet vehicles to help accelerate their goal for zero-emissions last-mile home deliveries by 2025. If you want to learn more about building a more accessible business model and ways to make your company's operations more sustainable in the long term it's time to learn about Fluid for Business.