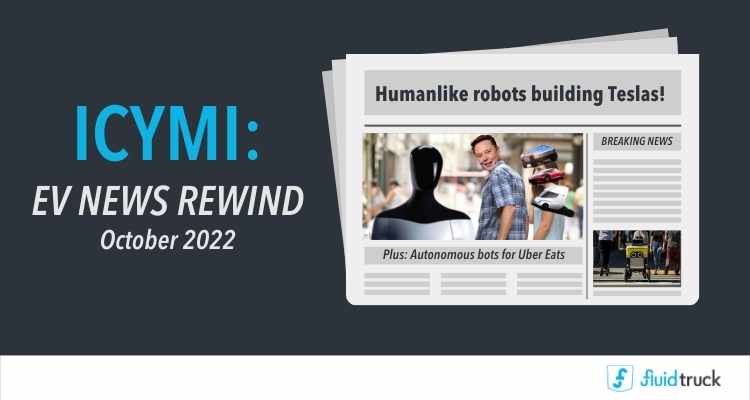 From California voting to ban the sale of gas cars, to New York making moves to do the same, to human-like robots being created for Tesla factories – there’s no shortage of things happening in the EV and tech world. Let's get right into it in this month’s EV Rewind.

Order through Uber Eats? You might soon have your meal dropped off by a robot

It’s not the first time Uber Eats has tried out robotic food delivery, but now the company is adding yet another autonomous delivery robot to the mix.

This Fall, the company said it will begin using Nuro delivery robots in two cities ahead of a bigger rollout. Nuro and Uber Eats signed a decade-long contract that will allow Nuro’s driverless delivery robots to take control of the food deliveries through the app.

The robots will roll out slowly, first hitting the ground in Houston and Mountain View, California, then eventually heading to the Bay Area. A big perk for customers is that they won’t have to tip the robot like they would a driver.

Just weeks after California voted to ban the sale of new gas cars, New York is making major moves to speed up its effort to do the same. New York Governor Kathy Hochul said she is ordering state regulars to move full speed ahead on the effort. She said the new requirement will go into place in 2035, ensuring all new passenger cars, pickup trucks and SUVS sold in the state are zero emissions vehicles.

Here’s the breakdown of the requirements:

Hertz is adding to its fleet big time, this time with 175,000 GM electric vehicles to be added over the next five years. There will be a variety of EVs in the lineup, including BrightDrop commercial trucks and Chevrolet Bolt EV crossovers. The program, set to start in early 2023, will lay out EVs in 38 states across 500 locations.

The company is also making moves to improve EV charging access. It announced in late September that it was teaming up with BP to install thousands of EV chargers. According to the plan, BP will install the chargers and offer software to allow Hertz to manage its EVs. The two companies said some charging stations will allow for public access.

Vic Shao, the president of bp’s fleet division in the U.S., described the partnership as a landmark moment. “It shows the power of bringing together bp’s digital and operational capabilities with a partner like Hertz,” he said. “Together with its industry-leading electrification ambitions, we can change the future of electric rental cars.”

Hertz isn’t the only rental company that provides electric vehicles on their platform. Fluid Truck is regularly adding EVs like the Ford E-Transit to its fleet. At the moment, EVs are available in LA, NYC, and Denver, and the list is growing! Check out the website or download the app to find an EV near you.

Tesla factories may soon be full of thousands of robots with human-like characteristics.

Word of the humanoid robot program first came about earlier this year when Elon Musk announced the company would be prioritizing the development of the robots. Now, a new job listing for the ‘Bot program’ revealed the plan is in fact moving ahead.

According to electrek, the listing reads in part, “Our motion planning software engineers develop and own this stack from inception to deployment. Most importantly, you will see your work repeatedly shipped to and utilized by thousands of Humanoid Robots within our factories.”

When Musk first talked about plans for the robot, he said they are intended to be “friendly” and eliminate tasks that humans normally do that are dangerous, repetitive or boring. He later said the robots will eventually be worth more than the company’s cars. Stay tuned. We will be following along for this one.