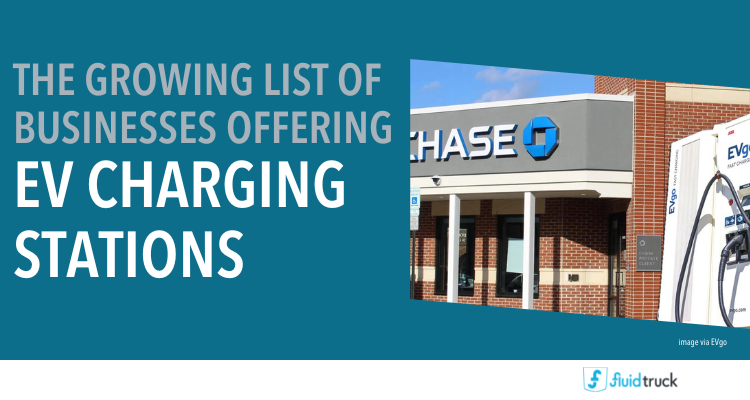 From grocery stores, to an iconic coffee chain, to a bank with thousands of branches; more and more companies across the country are installing EV charging stations for customers.

Let’s dig into some of the newest businesses to adopt EV charging infrastructure. For some, it’s a first time installation, for others, it’s time to add more.

Ikea just announced it would be partnering up with Electrify America to install ultra-fast EV charging stations to more than 25 Ikea stores in the U.S. This means Ikea will quadruple its number of EV chargers, inching closer to its sustainability goals.

“This collaboration with Electrify America will not only bring ultra-fast public chargers to our stores for the first time but it will also help us take a big leap as we work towards our targets to become circular and climate positive,” said Javier Quiñones, CEO & Chief Sustainability Officer at Ikea, in a news release posted in recent weeks.

This month, Starbucks announced it will have EV chargers available for customers at 15 locations along a route from Denver to Seattle. The coffee chain announced the effort is in partnership with Volvo and ChargePoint Holdings, Inc. A Starbucks in Provo, Utah, is already home to four charging stations, and now the plans call for the additional stations to run along a 1,350-mile route that goes through national forests along the Colorado Rockies to the coffee shop’s headquarters in Seattle.

The plan is full speed ahead. By the end of 2022 the company said up to 60 DC fast chargers will be up for grabs at the 15 different locations. About 100 miles sit in between each store along the route. Starbucks says this will help push the company forward in its goal to reduce its global carbon footprint by 50% in 2030.

How does the Volvo partnership come into play? Anybody can charge up for a fee, but Volvo owners can use the stations for free or at discounted rates. The ChargePoint DC fast charger can charge the Volvo C40 Recharge from 20 to 90 percent in about 40 minutes, leaving you plenty of time to grab a coffee and a snack inside the store.

In the words of Michael Korbori, Starbucks Chief Sustainability Officer, “Access to EV charging should be as easy as getting a great cup of coffee – and now, it can be.”

Chase points out this will be great for customers who can attend a meeting with a bank and get business done while their EV charges up. Jennifer Roberts, CEO of Chase Consumer Banking, said the idea came from feedback from their customers.

“We’re always listening and taking feedback from customers when it comes to the branch experience, and we know environmental sustainability is important to them,” she said in a news release.

The locations will have somewhere between two and six DC fast chargers and they are up for grabs from the general public– no need to bank with Chase to use them.

The bank is starting out by installing chargers at 50 of their 4,700 branches, staff told CNBC. Then they will monitor how many people use the charging stations to evaluate the need for installation in other locations.

Several big grocery brands have already committed to EV charger adoption, like Harris Teeter, Fred Meyer, Whole Foods and Kroger. Now, the largest supermarket chain in the country is upping the amount of charging stations it offers. Kroger is partnering up with Volta, Blink, Electrify America, EVgo, and Tesla for the expansion effort.

The new EV charging stations that Volta produces will also serve as digital media platforms, giving the grocer a way to provide ad space to clients. Another perk? That ad revenue will foot the bill for the cost of the chargers, which are free to the public.

Currently, Kroger has about 350 EV chargers across their stores. The new charging stations are set to be installed in Columbus, Cincinnati, Louisville, Nashville, Michigan and Southern California over the course of 2022.

The grocer has a goal to reduce greenhouse gas emissions 30 percent by 2030. It's also been installing solar arrays and currently has them at more than a dozen locations.