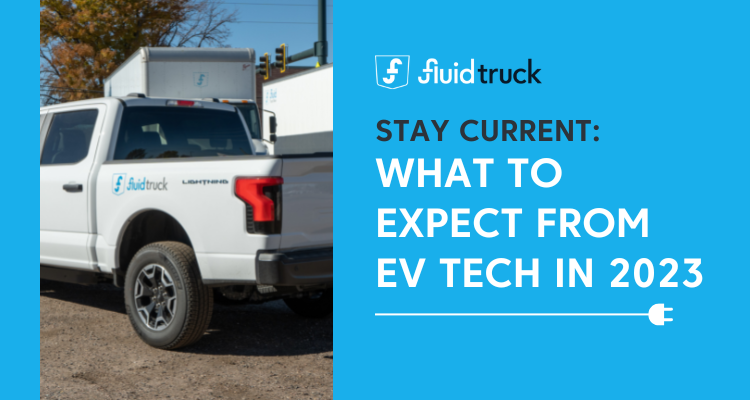 Stay current: What to expect from EV technology in 2023

As more corporations and government agencies emphasize the conversion from fossil fuels to more sustainable sources, we’ve seen a boost in funding spur the expansion of EV technology.

Here are a few of the EV tech advancements we’re most excited about this year:

Perhaps one of the most impactful EV developments to occur in 2022 was an announcement from the Department of Transportation stating that the government had approved EV charging network plans in all 50 states as well as Washington, D.C. and Puerto Rico. Over the next five years, states will have access to $5 billion worth of funding to create and expand EV charging infrastructure across the country.

The first step in 2023 will be to build out a network of charging stations along highways. The government will make $1.5 billion available with hopes to cover about 75,000 miles of road. This development will make it much easier for both commercial and residential EV drivers to travel long distances without fretting about where to find their next charge.

Another 2023 change that might give EV drivers a little extra peace of mind comes from Amazon. The company recently announced that it will be expanding Alexa’s capabilities to include a few EV charging features. Soon, users will be able to locate the nearest EV charging station by simply asking Alexa, and  will also have the ability to make payments by saying, “Alexa, pay for my charge.”

The VP of Amazon’s Smart Vehicles Department says the goal of these innovations is to make the EV refueling experience as seamless and simple as the gas-powered experience.

Gas-powered drivers can stop nearly anywhere for a fuel-up, but EV drivers have to put much more thought into their routes to make sure they never wind up too far from a charger. With Amazon’s new Alexa features, EV drivers should have a convenient way to locate a charging station, navigate to it, and make a payment without hassle.

Back in 2017, Tesla first announced the production of an electric semi that would be able to haul freight over longer distances with a range of 300 to 500 miles, depending on the price tag. It appears that dreams of this electric semi may finally become reality.

According to Tesla, the semi’s test runs indicate it will be able to haul 81,000 lbs up to 500 miles. With the expansion of the U.S. EV charging network across highways in all 50 states, refueling these heavy duty vehicles should become easier, enabling them to cover greater distances.

Along with an immense impact on emission reduction, these trucks could also be game changers when it comes to self-driving vehicles. Tesla claims that the electric semis will include an autopilot feature. Though there is still some debate about the overall safety of self-driving cars, giving worn-out commercial drivers the option to utilize autopilot for assistance at the wheel could, in fact, enhance driver safety rather than reduce it.

Fleets making the switch to EVs

The USPS recently debuted a plan to deploy up to 66,000 EVs by 2028. If the plan comes to fruition, the Postal Service will have one of the largest EV fleets in the U.S., making a drastic impact on the reduction of carbon emissions. USPS expects to acquire 60,000 Next Generation Delivery Vehicles over the next few years, 75% of which will be EVs. An additional 21,000 commercial off-the-shelf EVs may be purchased as well, depending on their availability.

USPS plans to further reduce emissions by making transportation more efficient. The Postal Service hopes to increase efficiency with fewer truck trips and less air cargo. The EV fleet will include quality of life improvements for drivers as well, such as air conditioning and better safety technology. The new Next Generation Delivery Vehicles are expected to hit the roads by late 2023.

Since EVs depend heavily on a high-quality battery, the price of manufacturing these batteries has a direct effect on the price of EVs. A decrease in battery costs in both 2020 and 2021 led to an increase in EV purchases thanks to lower prices and higher demand.

In 2022, however, the prices of raw materials like lithium needed for battery manufacture increased because of shortages, causing EV prices to skyrocket. As this struggle for raw materials continues, the cost of purchasing EVs could remain high throughout 2023 and years to come.

Some manufacturers are circumventing this issue by designing EV models that utilize a sodium ion battery instead of a lithium battery. Sodium is both naturally more abundant than lithium and of lower cost, making it a cheaper alternative that could help drive the prices of EVs back down.

More research is needed before sodium ion batteries can officially hit the market, but these batteries could be a contender to replace the rarer raw materials like lithium in the future.

With the acquisition of electric vehicles and the charging infrastructure to power them, Fluid Truck is making it easier for individuals and businesses to use a commercial-sized EV. Download the app and filter by electric vehicles to see if there are any available near you!