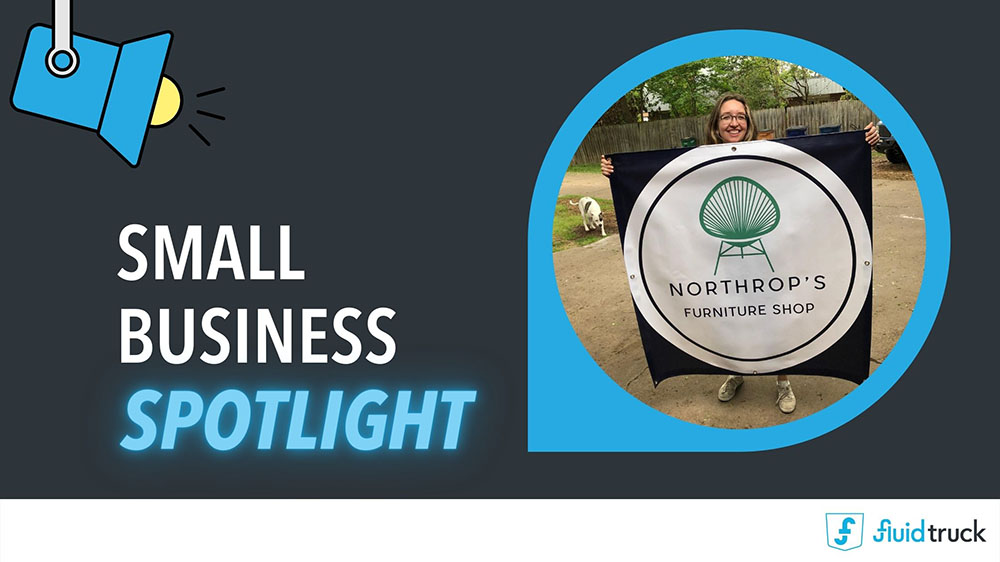 For Kendra Loposer and MJ Northrop, restoring vintage furniture to its former glory is only part of the job.

At their Austin, Texas Northrop’s Furniture Shop, the duo also sees themselves in the business of holding onto memories.

Take the recent client who came in with a mid-century modern dresser set. Her parents had bought it in the ’50s and handed it down to their daughter, but it was badly in need of re-staining and refurbishing. In the process of carefully dissembling the drawers, Kendra and MJ came across something special.

“We found these old black and white photos in the drawer,” Kendra says. “When the client came in to pick the piece up, we handed them to her and her whole face lit up, and she got a little teary.” It turns out the photos were of the client and her baby brother when they were children, photos she had never seen before.

It’s all in a day’s work for MJ and Kendra, whose Northrop’s Furniture Shop has grown from a side hobby to a thriving business. MJ, a former contractor, and Kendra, who has a background in costume design and theatre, bring a rare combination of skills to the market.

“We restore and refinish antique furniture, and there aren’t very many of us,” Kendra explains. “It’s a dying art. We do a lot of cane reweaving and replacing, mid-century and older. One of the things we love about what we do is that we’re preserving something unique, breathing new life into these pieces, and keeping them out of the landfill—fixing something that might otherwise be put out to the curb.”

Growth and a Challenge

But the boom both in Austin’s expansion and interest in mid-century modern design have driven their business growth to where they’ve needed to become strategic and flexible with their business.

“We’re seeing a huge spike in midcentury pieces due to current design trends,” Kendra says. “And Austin has this large, affluent tech population who have the means to buy these beautiful designer pieces and have them redone.”

That means their clientele has also shifted from retired-age clients with nostalgic pieces to young professionals with serious design aspirations—and rare, high-quality finds, like a recent chrome and weave restoration they did on a museum-quality Mies van der Rohe chair.

But as their profile elevates, so do their business challenges, and a big element of that was pick up and delivery. Previously, Northrop’s had hired out third-party movers to handle their pick ups, which was a critical part of their business service, particularly for older clients who had heavy, awkward pieces.

Frustration became part of everyday business. “We’d have organized the logistics and the movers would be two hours late, and here we had a paying client waiting,” says Kendra. We were having such a hard time finding someone reliable and consistent.”

Add to that challenge that their needs were sporadic, and their schedules ever-changing. “Often we have challenges with pieces taking longer to dry due to changing weather and humidity, so we have to pivot all the time. So when you have this third party lined up, it became too much for us to manage,” she says. The team rented box trucks, and tried using trailers, but they were awkward to drive and uncomfortable.

A Pivot and a Solution

MJ had seen Fluid Trucks driving around town. “One day, MJ walked in the office and said, ‘Enough, I’m done juggling, we’re doing this, and we’re doing this TODAY!’” Kendra says. They booked their first Fluid Truck vehicle right then.

The strategy has worked like a charm. Northrop’s shop manager groups deliveries together and reserves a transit van as needed, because the transit vans can fit multiple orders at a time. “And if we need a last minute thing we can snag a truck if we need. They’re really comfortable!” Kendra says.

A surprise bonus for Northrop’s? “The Fluid Truck transit vans are nicer and look more professional when we pull up to a client’s house. We’re planning to get a logo magnet to throw on the side of the truck so we look official.”

MJ and Kendra’s biz is on the rise, and with a creative mindset and flexible partnerships, they’re able to convert happy customers to raving fans. In fact, most referrals come from word of mouth, and they’re booked out months in advance.

Their best advice to other entrepreneurs? “Be willing to pivot, or to jump on an idea when it presents,” says Kendra. “For example, the Fluid Truck decision. We jumped in and went all in. And if you try something and it doesn’t work out, you pivot again, right? If not, you move on. You don’t always know in the moment what is going to turn out to be a really wise decision; you just have to give it a try.”

Fluid Truck is perfect for business owners like Kendra and MJ who want to easily scale their business without the headache of third party delivery companies or traditional rental companies. Learn more about Fluid Truck for business here.