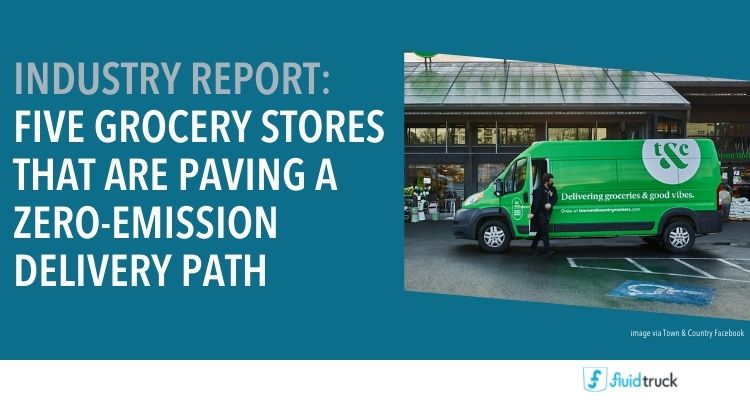 Five Grocery Stores That Are Paving A Zero-Emission Delivery Path

Grocery delivery has become the standard for many shoppers, especially since the pandemic. Are zero-emission deliveries up next? We are jumping into the future of grocery delivery and grocers that are already putting sustainability first.

Giant Food announced just last month that it added two EVs to its fleet of 128 vehicles, and this is just the start! The Mid-Atlantic grocer says plans are in the works to bring more EV’s to its platform over the next few years.

Giant Food has 164 grocery store locations throughout Virginia, Washington D.C., Maryland, and Delaware, and already has free EV charging stations at many of its stores. The company has focused on sustainability for some time. According to its  website, those efforts focus on using less plastic and exhibiting transparency in its supply chain.

The two new fully electric delivery vehicles have 105 miles available on a single charge. The EVs are predicted to reduce greenhouse emissions by 63% during their lifetime and eliminate the use of  more than 210,000 gallons of gas. A few other perks? They are quiet and they can transport just as much weight as the other gas-powered vehicles in the fleet.

Wondering what this will cost the grocer?. The company was able to fund the EVs through a grant handled by the Maryland Energy Administration. The owner of Giant Food, Ahold Delhaize, is on a mission to reach net-zero carbon emissions by 2040, and this is one of the steps they’re taking to make it happen

In April of this year, Seattle-based Town & Country Markets announced it was teaming up with PacWesty to expand its  fleet of EV delivery vehicles. PacWesty is an adventure travel company in the Pacific Northwest is known for its sustainable electric campers. Now it’s adding grocery delivery service to the list!

The pivot started during the pandemic when the company saw a need for more at-home delivery providers. Research shows this demand is here to stay. PacWesty’s vans weren’t always electric. In fact, they were originally gas powered but were rebuilt as EVs. The EVs  are built to use with a battery-powered  cooling sthat cools the cargo areas so  there’s no fuel-needed to keep groceries cool

The senior director of technology with Town & Country Markets, Ryan Ritter, talked about the partnership to supermarketnews.com.

“As we considered entering our communities and neighborhoods, we didn’t want to show up with noise and added pollution,” Ritter said. “PacWesty provided the perfect zero-emissions vehicle options, enabling us to responsibly deliver groceries to our customers and stay true to our sustainable values.”

Town & Country Market credits the service for already making an environmental impact. It said since the start of the service, about 49 metric tons of CO2 emissions have been avoided.

Albertsons is one of the largest food retailers in the country, operating 2,276 retail stores. In 2021, the company added two electric Class 8 trucks to its fleet lineup to serve locations in southern California. In total, the company has 1,400 Class 8 trucks across the country, all of which meet the EPA’s SmartWay program, which requires high sustainability and efficiency standards.

“As a long-standing neighborhood grocer, we have an ongoing commitment to leverage our resources and expertise to support the communities we serve and the planet we share,” said Sankaran

The grocer also outlines its goals in reducing carbon emissions in the coming years. Here’s what the company plans to have done by 2030:

Two ShopRite stores in Pennsylvania fired up 100% electric grocery delivery carts in 2021. The robots, constructed by Tortoise, have an average speed of three miles per hour and usually travel on the sidewalk or side of the road.

The carts are controlled remotely and can make deliveries within three miles of a store and can hold up to 150 pounds. The company that built the robots did some number crunching, and found that by cutting out a car and a driver, costs can be reduced by $6 or more for each order.

In a 2021 interview with TechCrunch, the CEO of Tortoise explained why grocers should consider robotic deliveries, and he highlights more than just the impact on the environment.

“Everybody’s waking up to this new reality that same-day is the new normal, and it’s just not sustainable on every possible front to have that consumer expectation be met with people making $20 an hour doing those deliveries,” said Dmitry Shevelenko. “The math just doesn’t work.”

According to the findings of a study released just this month, the autonomous vehicle market is expected to grow at a CAGR of 47.5% by 2028.

Save Mart  started using robot-powered delivery at one of its locations in the East Bay region of the San Francisco Bay area this year. The launch makes the store, Lucky California, an expansion of the grocer’s deal with Starship, which builds the delivery robots. The company has an interesting breakdown here of how the robots know how to get around. After shoppers pick out what they want in an online order, a store employee puts everything in the robot. Shoppers can track its route on an interactive map through its app and then get an alert when it’s time to come out and get their groceries. It’s safe to say a whole new world is ahead of us in the grocery industry!