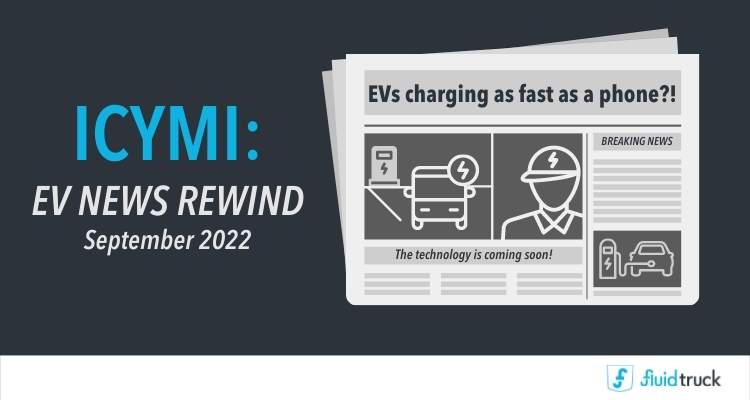 A lot has happened over the past couple of weeks in the LMD and EV world – from plans of a $4.4 billion EV battery plant, to a new study that found last-mile drone delivery cuts down on greenhouse-gas emissions, to a promising future for the charging speed of EV batteries. Time to dive into our September EV Rewind!

Do you want your EV to charge as fast as your iPhone? In five years it could be a reality.

Researchers at a center run by the Department of Energy said an EV’s battery could charge 90 percent within 10 minutes once charging methods are perfected. Researchers said although the method is still years away from debuting, they’ve found a way to do it.

The Washington Post laid out the details in an August article, writing that the team of researchers used machine learning to understand how batteries age while charging fast. They used an algorithm that was built to analyze 20,000-30,000 data points which gave insight to how well the battery was charging and if it was experiencing any aging during the process.

The team said they are pushing to find a way to charge batteries up 20 miles per minute, which would surpass the top performing super chargers.

A new $4.4 billion EV battery plant is headed to the United States

Right now, the plant location is still up in the air. Reuters reports Japan’s Honda Motor and Korean-based LG Energy might be eyeing Ohio, where Honda’s main U.S-based setup is.

The two companies are planning to establish a joint venture before breaking ground on the plant, which could start in early 2023. The goal is for mass production of the advanced lithium–ion battery cells to get rolling by the end of 2025.

In a joint statement, the two companies said the plant would solely produce EV batteries for Honda vehicles built in the U.S and would include its Acura brand as well.

"Honda is working toward our target to realize carbon neutrality for all products and corporate activities the company is involved in by 2050," Honda Chief Executive Toshihiro Mibe said.

Back in April, Honda announced big plans for EV growth, saying the company would release 30 EVs across the globe and build 2 million by the year 2030.

Researchers from the Journal Patterns, took a deep dive into drone flight data and found greenhouse-gas emissions were 84% lower for drones when compared to diesel trucks for each package dropped off at a customer’s door. Drones were also found to consume up to 94% less energy per package than delivery trucks.

One-third of transportation-related greenhouse-gas emissions come from freight transport. It’s no surprise companies like Amazon and Kroger have been testing out autonomous LMD. NPR interviewed one of the co-authors of the study, Thiago Rodrigues, who is a transportation researcher at Carnegie Mellon University.

"We have more and more people ordering goods online and expecting them to be delivered very fastly to our homes,” Rodrigues told the host. “So, adopting these new vehicles could present a very important reduction on the environmental impact we have from buying more goods online."

Rodrigues also pointed to the fact that using drones for LMD in cities avoids traffic and longer routes in order to deliver a small amount of packages in rural areas.