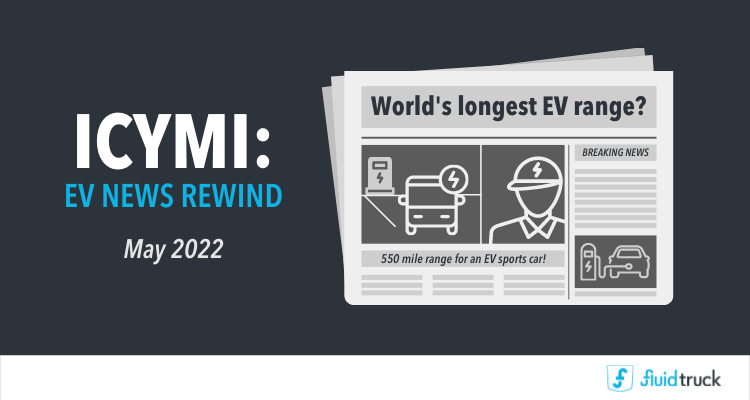 Time to grab a cup of coffee and get caught up on the latest in the world of tech, EVs and last-mile delivery. It’s time for May’s EV Rewind!

We are giving you the lowdown on a new electric GT that is said to have the world’s longest range, just announced federal funding for EV batteries, and self-driving deliveries from Walmart.

The company just announced Project Ronin, which is Fisker’s third EV. It posted the announcement on Instagram describing the new EV as, “an innovative, high-tech electric GT sports car.” The caption said the battery pack is integrated into the structure for more efficiency and lower weight. It said the new EV will have a range over 550 miles and expected pricing starts just under $200K.

So, what can you do with a range over 550 miles? Think: hauling four adults and all their bags on a long road trip. Even though this is the company’s third EV, we have yet to see one on the market itself.

Where does the name come from? The movie Ronin known for its famous car chases, of course! In the May 4th press release CEO Henrik Fisker said, “Project Ronin will be a showcase for our internal engineering, powertrain, and software capabilities.”

He also talked about how the engineering team used advanced and lightweight materials that improve the Ronin’s range, performance, and overall driving experience.

Time to turn our focus to legislation! The White House has announced $3.1 billion in funding for domestic EV batteries

The just-unlocked grants are part of the Bipartisan Infrastructure Law enacted in 2021. They will be aimed at companies that build “new, retrofitted or expanded battery processing.” The goal is to get domestic battery production rolling and to, “make our country more secure and spur the creation of good-paying jobs,” according to Mitch Landrieu, senior advisor, and infrastructure coordinator. He went on to explain that the initiative will also help the U.S. fight against climate change and push us toward becoming more energy independent.

The Biden administration also said it’s setting an additional $60 million in grants aside that will be reserved for battery recycling needs.

Remember Cruise, General Motors’ self-driving car unit? It is about to take on more responsibility!

The company announced it is expanding its autonomous deliveries in Arizona with Walmart. This means a shopper’s Walmart order can be delivered by an all-electric car. You can track the order’s progress and then meet high-tech Cruise at the curb to pick it up. It is as simple as using your phone to unlock the back passenger door! Another perk? Walmart shoppers are told they will save cash on their order by allowing it to be delivered by Cruise.

Cruise will not be doing limited drop-offs for shoppers in Chandler and Scottsdale Arizona.

Want to stay updated with all the latest EV News? Make sure to follow Fluid Truck on Twitter!