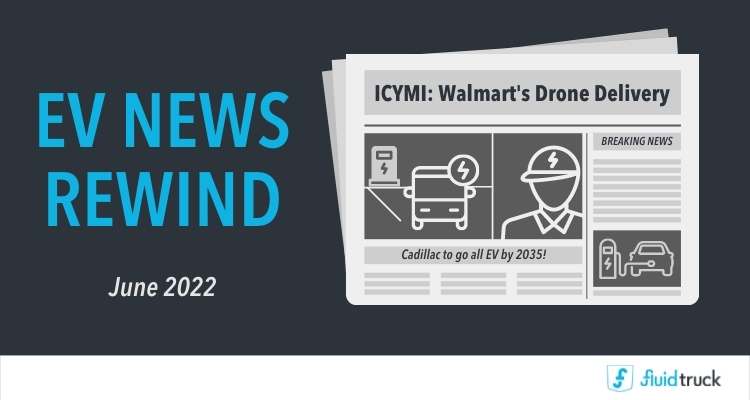 It is time for a little June EV Rewind action! What is happening out there in the EV, LMD and tech world? Walmart is adding more locations for drone grocery drop-off, Buick has made a bold claim for their EV manufacturing, and we are talking about the return of The Scout.

Do you live in Arizona, Arkansas, Florida, Texas, Utah or Virginia? You could soon have those baby diapers you forgot to pick up on your grocery run dropped off in your yard for a $3.99 delivery fee. In fact, order anything you want, just keep it under 10 pounds.

It’s all done using a cable that gently lowers your package of purchases right into the grass. Walmart said it will expand the deliveries to 34 sites by the end of this year.

“After completing hundreds of deliveries within a matter of months across our existing DroneUp hubs, we’ve seen firsthand how drones can offer customers a practical solution for getting certain items, fast,” the company wrote in a press release about the announcement.

You might be wondering what shoppers are using these drone deliveries for. Think: quick fix weeknight meals. Yep, Walmart said the top-selling item at one of the hubs is Hamburger Helper.

Remember The Scout, the competitor to the Ford Bronco that was last seen on vehicle lots about 40 years ago?

It is having a comeback (at least in 2026)! Its new life is part of Volkswagen’s line of all EV trucks and SUVS.

“Electrification provides a historic opportunity to now enter the highly attractive pickup and R-SUV segment as a group, underscoring our ambition to become a relevant player in the U.S. market,” said CEO Herbert Diess.

The EV trucks and SUVs will be designed and built in the U.S and Volkswagen said the first prototypes will be released next year with production starting in 2026.

Diess described The Scout as a separate brand within Volkswagen. According to Reuters, the automaker plans to invest around $106 million into the new brand.

Come 2030, Buick says it will only offer electric vehicles

In a just-released announcement, General Motors Co. said there’s an overhaul in the works for its Buick models. By the end of this decade, it says all Buick models will be electric! It kicks off in 2024 with an electric crossover SUV that will carry a price tag under GM’s Cadillac EVs.

Rob Peterson, a brand marketing manager for Buick, described the new EV crossover as something that is not in the market.

“You have a gorgeous electric vehicle that isn’t expensive,” he said.

The new EVs will be sold under the company’s sub brand: Electra. GMs Chief Executive Officer, Mary Barra, also pointed to plans down the road to make all Cadillac’s vehicles electric by 2030 and the rest of the company’s vehicles will follow, reaching that goal by 2035.

According to Alexander Edwards, president of marketing research firm Strategic Vision in San Diego, Buick’s goal is to bring in new buyers.

He explained it like this, to Bloomberg: “Buick isn’t bringing in enough new blood,” Edwards said. “They’re relying on cannibalism of GM brands.”