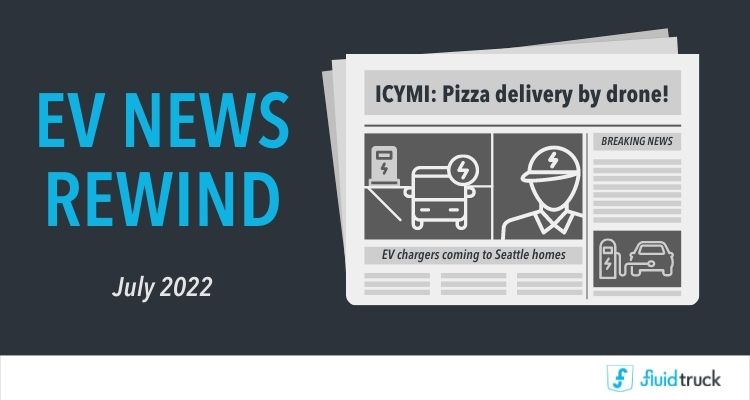 We hope you had a fun Independence Day with fireworks, friends, and family. It is time to jump back into the work week and another edition of the EV Rewind! We are talking pizza deliveries by drones, curbside charging stations coming to Seattle, and more.

From Amazon deliveries to grocery drop-offs, drone deliveries are becoming more of a reality. Could your Domino’s pizza be the next thing dropped into your yard?

It was just announced a drone delivery trial is underway in New Zealand for the pizza chain. SkyDrop has finished production of the drones and delivery trials are set to start later this year. Does this plan sound familiar? Back in 2016, Domino’s announced plans to deliver customers a pie in the sky, and now those plans are being revived.

SkyDrop has been reworking its tech over the years. Now the U.S.-based company says its drones can handle more weight and have a more precise delivery area.

“We invested in this partnership and technology because we believe drone delivery will be an essential component of our pizza deliveries in the future,” said Don Meiji, Domino’s CEO.

The company is rolling out delivery robots at some restaurants in Florida, Texas and California. Austin-based company Refraction AI is producing the robots that will take on the task of delivering chicken, waffle fries, and the ever-so-loved Chick-fil-A sauce.

“At their full potential, these robots can enhance restaurant operations, cut delivery costs and provide great-tasting food with the consistency our guests expect,” the company said in a press release.

Get this: the robots have their own artificial intelligence systems and advanced depth-perception cameras, which means they can make their way around busy malls and streets and even navigate traffic patterns. Plus, they are speedy. In Austin they can go up to 15 miles per hour.

EV curbside charging to hit the ground in Seattle

The new pilot program with big goals allows homeowners and landlords who own EVs (or plan to buy one within a year) to request a charging station.

Right now, there are plans to get 30 on the ground, according to KING 5 Seattle. The goal is to reduce transportation emissions by 83% by 2030.

According to the U.S. Department of Energy, 90% of EV charging happens at home. However, the city says this is a challenge in Seattle as some neighborhoods do not have driveways or garages, limiting EV owners’ charging options.

The idea is not brand new. The city is leaning on another city that has already tackled the problem, or at least gotten a good head start. Melrose, Massachusetts is the first city to install pole-mounted EV chargers on the East Coast. Right now, they have seven in use and eight more on the way.

As for the Seattle program, the city has already received more than 300 requests.

Need a charge for your EV while you do your grocery shopping? The country’s largest supermarket chain is upping its EV charging game.

Kroger is in the process of adding more level two and three EV chargers to their store parking lots. The grocery chain already has about 350 chargers up and running in Arizona, California, Colorado, Georgia, Indiana, Nevada, Oregon, Texas, Utah, and Wyoming.

These additional chargers will offer even speedier charging for shoppers. The new plans mean the charging stations will hit stores in Columbus, Cincinnati, Louisville, Nashville, Michigan and Southern California in the coming months.

“We are leveraging technology and innovation to reduce our greenhouse gas emissions and are offering customers easy ways to live a more sustainable lifestyle,” said Yael Cosset, Senior VP at a Cincinnati-based Kroger.