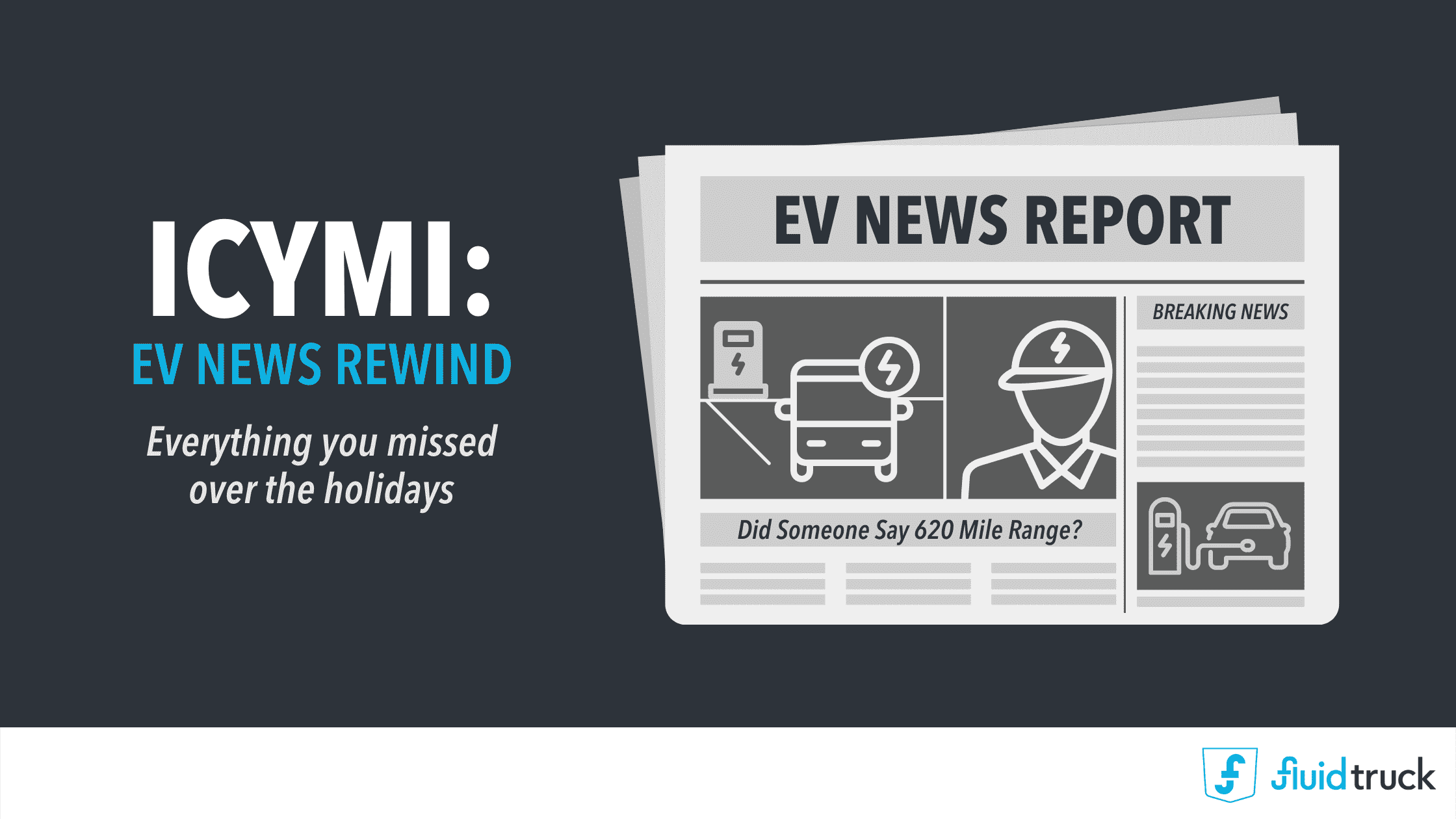 Time to jump back to the latest in EV News! If you spent the past few weeks taking some time off and enjoying time with family, no worries! We are here to get you caught up on what you missed at the close of 2021 and what’s ahead for electric vehicles in 2022.

ICYMI: A Rundown of the Newest EVs Coming in 2022

Remember when Tesla was the only company saying electric was the future? Those days are gone. Now, all of the other big names are racing to catch up, and this could be the year it happens. Close to 30 new EVs are slated to roll in as 2022 model year machines.

Here are just a few getting the most buzz:

The much anticipated spring rollout has generated so much demand that Ford CEO Jim Farley had to announce the suspension of reservations for the pickup until they can fulfill the first 200,000 orders. Ford promises the Lightning will keep evolving with you over time. He describes it as “the smartest, most connected F-150 Ford has ever built.”

Having missed their original release date at the end of 2021, Tesla is now expected to begin production of the long-awaited Cybertruck in late 2022. The futuristic-looking pickup truck is expected to come with a starting price of $39,900 with an anticipated range of 250 miles on a full charge. However, if you are seeking a futuristic 500 mile range to match the sci-fi aesthetic, it’s going to come at a cost–the tri-motor starts out at $69,900.

For more instant gratification seekers, the R1S SUV from Rivian is expected to hit the market sooner than later. In fact, the California-based start-up is expected to start shipping to customers as early as March. The new SUV has a starting price tag of $70,000 with up to 750 horsepower and estimated range of 316 miles on a full charge.

For luxury seekers on a budget, the less expensive version of the Lucid Air is almost here! Think: $77,000 price tag instead of $169,000 for the high-performance Dream Edition. You’ll have to wait until later in the year until it hits the market.

Other EVs coming to the market in 2022? Let’s not forget the Fisker Ocean all-electric luxury crossover and the electric minivan from Canoo. Plus, BMW will unveil its first electric SUV, the BMW iX, and more.

Lack of Charging Infrastructure Keeping You From Making the Jump to an EV? Mercedes Claims to Have the Solution

The company’s new all-electric concept car, the EQXX–a high-end, futuristic car constructed with an array of recycled and sustainable materials–boasts 620 miles of range on a single charge. A far cry from the first round of EVs that came out about a decade ago that averaged 80 to 100 miles, and significantly more than today’s average EV range of 200 miles. Alleviating the anxiety surrounding lack of infrastructure outside of urban areas that has had many prospective car buyers opting for hybrids over fully electric.

We’ll have to wait until spring to see the company’s demonstration of the car’s range in an actual driving test. For now, the range claim is just based on computer simulated driving. If the numbers are solid, it means the EQXX could drive a further distance on a single charge than a Toyota Prius on a full gas tank.

What else is ahead for Mercedes? By 2025 the company has a goal of half of its sales being EVs. By 2030, the company hopes to be all electric.

What About the World of Commercial EVs?

Remember those Tesla electric semi-trucks? The company recently secured another order of the upcoming electric class 8 trucks after they have been delayed several times. Now, they are inching closer to production. The original reservations required a $5,000 deposit per truck but now there’s been a jump in deposit price. A deposit of $20,000 is required for a “base reservation” and the full $200,000 for the “Founder Series” truck.

Sony Rolls Out Prototype SUV, Steering Closer to Selling Its Own EV

When you think of Sony, you probably think of electronics. Soon, an electric SUV might come to mind. The Japanese electronics firm has a plan in the works to launch a company this spring that would inch it closer to entering the EV market.

"With our imaging and sensing, cloud, 5G and entertainment technologies combined with our contents mastery, we believe Sony is well positioned as a creative entertainment company to redefine mobility," said Sony chairman and president Kenichiro Yoshida at a news conference.

Looking Ahead to the EV World in 2022

While EVs are still a tiny dot in the U.S. Vehicle Market (by the end of 2020 they only made up about 2.5% of the total market), the demand for them doubled during the first half of last year. The demand for commercial EVs continues to grow as well. The first week of the new year, BrightDrop, GMs electric commercial vehicle business, said it signed a new deal to supply its EVs to Walmart and expanded its supply agreement with FedEx.

In the words of GM CEO Mary Barra – this year could bring the “tipping point,” as the EV market expands. CNBC’s Brian Sullivan makes a 2022 prediction:

Between a growing consumer demand and an array of new choices, EV purchases will climb in 2022. How much? AutoPacific’s Future Attribute Demand Study data reveals the amount of people interested in EVs has tripled over the past three years. To add to it, 9% of new vehicle shoppers in 2021 say they will be on the hunt for an EV next time around, compared to 3% who said so in 2019. It forecasts EV sales will climb to 650,000 in 2022, which adds up to a whopping 45% increase over EV sales last year.