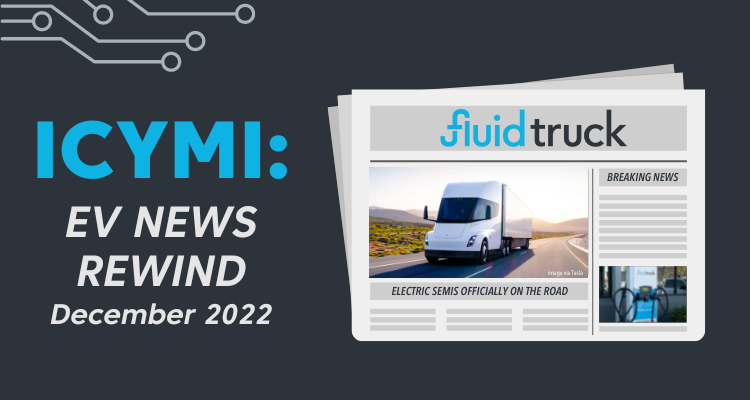 The end of the year is fast approaching! Let’s jump into one last EV Rewind for 2022.

This month we are talking about a pizza-delivery chain that’s switching to a greener fleet, a big milestone for Tesla Semi, and hundreds of travel centers that plan to build a charging network for heavy-duty EVs.

You want your pizza delivered to your door hot and fresh. Soon, it could also be delivered more sustainably.

Domino’s Pizza is forking out money for 800 Chevy Bolt electric vehicles to add to their fleet. The company said the move will  cut down on its environmental impact and help  recruit drivers.

The EV fleet ties in with the company’s net-zero carbon emissions goal which it aims to reach by 2050. On the company’s website, it said the arrival of the custom-branded 2023 Chevy Bolt EVs will make Domino’s “the largest electric pizza delivery fleet in the country.”

The website goes on to explain why it picked the Chevy Bolt: “The Chevy Bolt EV has zero tailpipe emissions, a 259-mile battery range, advanced safety features and lower average maintenance costs than nonelectric vehicles, all without the financial impact of high gas prices.”

This is not the first time the pizza chain has tried to  take deliveries to the next level. In the past, it tested autonomous vehicles and an e-bike program.

Elon Musk announced the news on Twitter, saying the “Tesla team just completed a 500 mile drive with a Tesla Semi weighing in at 81,000 lbs!” The all-electric class 8 commercial truck was supposed to be in production in 2019 but faced several delays.

Now, Electrek predicts it will have a big impact on the trucking industry since it can carry a significant load with a lower cost compared to gas-powered trucks. Currently, the weight limit for semi trucks in the U.S. sits at 80,000 pounds, but EV truck makers have been working with lawmakers to try to raise the limit for EVs.

Remember when late-night study snacks came from a vending machine? Students at Ball State University in Indiana and Missouri Science and Technology University in Rolla, Missouri, are getting quite the upgrade.

Last month Ball State University launched a fleet of 24 robots that can bring food and snacks from dining locations to areas throughout campus. The fleet of robots, produced by Starship Technologies, is able to deliver the equivalent of three shopping bags of food. They come equipped with six wheels and 12 cameras, sensors, radars, and much more. Students and staff can order food through an app that allows them to drop a pin on their location.

In Rolla, Missouri, Missouri S&T welcomed 16 autonomous robots to campus, also created by Starship Technologies.The robots typically deliver an order in less than 10 minutes and give each customer about 10 to 15 minutes to grab their order before it takes off. Plus, a fun bonus: students can request a song for the robot to play during delivery. Talk about customer service!

Volvo Group and Pilot Company plan to develop a charging network across Pilot and Flying J travel centers catering to medium and heavy-duty EVs. While the two companies have signed a letter of intent, details of when the rollout could happen are still under wraps.

Along with the addition of the charging network, Pilot announced plans to update 400 of its locations. The $1 billion investment would enable upgrades such as new seating and lounge areas, Wi-Fi, and even restaurants and shopping.

In a press release from the two companies, the president of Volvo Trucks North America said, “Our VNR Electric customers, as well as other fleets looking to adopt battery-electric trucks, will have peace of mind that they can access a reliable and robust, publicly accessible charging network strategically located along major transportation corridors, enabling them to extend their operating radius and decarbonize even more of their routes."

The release said the chargers will be strategically placed at travel centers that sit along transportation corridors and often serve professional drivers.