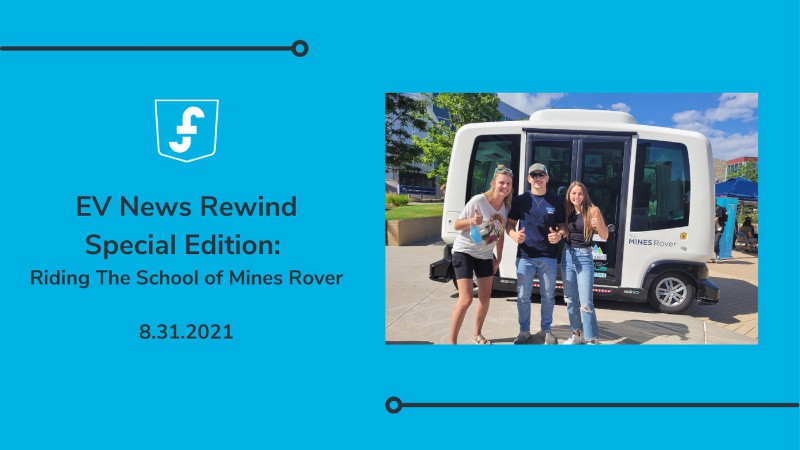 Ride Along With Us as We Explore the Largest Fleet of Autonomous Electric Shuttles in the US!

Golden, CO is known for a few things: the Coors Brewery HQ, the Colorado School of Mines, and most recently for being the home of the largest fleet of autonomous shuttles in the nation. Since Golden is only a quick 20 minute drive away from the Fluid Truck home office, we naturally decided to take a field trip to experience the Mines Rover for ourselves. Keep reading to learn all about the experience!

What Is the Mines Rover Program?

The School of Mines Rover program is part of a larger project with Autonomous Vehicles Colorado (AvCo), which is aimed at deploying the “nation’s first highly automated, connected, electric and shared public transit service in three different locations in Colorado.”

Along with several other partners, School of Mines is the first location for the AvCo plan. This is all part of the huge goal to get a million EVs on the streets of Colorado by 2030.

Let’s Go for a Ride!

We arrived at the School of Mines Parking office to meet with Dave Barry, the fleet manager. Dave has been in the parking industry for over two decades, and called the Rover project the most exciting part of his career. Dave brought us to the Brown Hall stop along one of the Rover’s three routes to catch a ride.

The shuttle looks less like a traditional bus, and more like a large, quiet toaster on wheels. Inside, the futuristic cabin has six seats, a map screen, and buttons to control the doors and to deploy in case of emergency. There are windows on all four sides of the vehicle, and finally a student operator that carries a yellow, lunchbox-like device around their neck that houses joysticks for manual override operations.

And Off We Go!

Our student operator, Ed, welcomed us and reminded us to all buckle up. Ed’s responsibilities are to operate the doors of the vehicle, answer questions, let the vehicle know when it’s safe to run after a stop sign, and to manually drive the vehicle out of situations such as when the predetermined stop is occupied by an illegally-parked vehicle.

Although the vehicle is technically “autonomous,” we quickly realised that the technology is far from being self-sufficient without human operators. Most notably, after each stop sign, yield sign, or stoplight, the operator must indicate when it is safe for the vehicle to continue on its invisible track. On our 30 minute ride, we came across two stops that were occupied by illegally parked vehicles.

Students who want to be operators on the Mines Rover must apply and then take a 10-hour training course on operating the vehicle. Students then work 2-hour shifts running the shuttles.

So How Does the Shuttle Work?

Currently, Mines has seven of the Rovers, nine charging stations, and three routes in operation. The invisible track the Rovers operate along is determined by satellite signals and cell phone signals.

Dave told us that students have tested the vehicles’ safety technology–someone even jumped in front of a vehicle and it was able to immediately stop without injuring anybody. While we were on our ride, a bicycle got a little too close and the sensors immediately deployed the brakes and a collision was avoided. The Rovers have a top speed of 12mph, which is about as fast as you can go while still being able to instantly stop.

What’s Next for the Mines Rover?

At the moment, the Rover program is just a pilot set to expire in July of 2022. Dave hopes that the program will become a permanent fixture at Mines. The AvCo project is set to debut in two other Colorado cities soon.

Learn more about the program and the details of the Autonomous Shuttles here! Want to see footage from the ride? Check it out on TikTok!