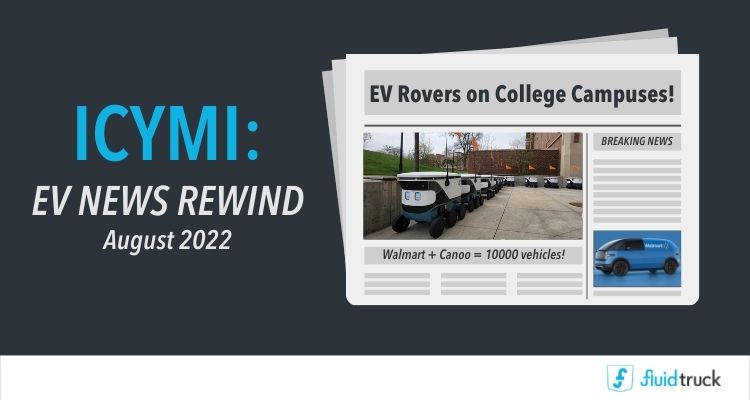 Select Amazon delivery vans got a revamp recently, Walmart is purchasing its own fleet of EV vans, the U.S. Army is eyeing Canoo’s technology, and food delivery robots are hitting one college campus this fall. It’s time to jump into this month’s EV Rewind!

A greener drive from Amazon warehouses to your front door

Amazon is officially rolling out its custom-made delivery vans, produced by Rivian. It’s all in a goal to cut down on emissions. Amazon announced its partnership with Rivian nearly three years ago. Now, some of its 100,000 EVs from Rivian are finally in gear!

As of July 21st, hundreds of the EV vans have already hit the road, in cities like Chicago, Phoenix, Baltimore and Seattle. As Amazon slowly adds to its own LMD fleet of vans, it will ease off reliance on UPS and other delivery contractors.

Getting to production of 100,000 vans won’t happen overnight. In fact, the timeline is a bit unclear as it stands right now. Amazon says the plan is to have 100,000 vans on the road by 2030, but a July 21st New York Times article also points to Rivian’s struggles with ramping up production because of semiconductor shortages. We’ll keep you posted on the progress!

Amazon isn’t the only big box retailer moving forward with a greener future.

Walmart is purchasing 4,500 Canoo EVs, and the United States Army is also interested in Canoo’s technology.

In mid-July, Walmart announced it’s buying at least 4,500 of Canoo’s EV delivery vans. The market liked this announcement, boosting Walmart’s stocks by 50%. Walmart could end up purchasing up to 10,000 vans, which the company plans to have up and running by 2023.

This purchase will help Walmart compete with Amazon as the company tries to expand services like InHome, its grocery delivery service. The EV vans will also help support Express Delivery, a service that  allows customers to get their  items in two hours or less. Walmart is adding to the other EV vans it has in use and on order, including the Ford E-Transit and a batch of 5,000 vans on order from BrightDrop.

The United States Army is also eyeing Canoo. The EV startup will be supplying some of its technology to the Army for evaluation processes. According to a press release, , the Army is interested in the company’s multi-purpose platform.

“This contract supports the U.S. military’s focus to incorporate scalable and adaptable capabilities in operational and garrison environments,” it said.

Ohio State University students will notice robots on wheels on campus this fall. The robots will travel around to drop off food orders with hungry students. The autonomous delivery buggies were first tested on the campus during the Spring semester, bringing food from food providers to dorm rooms on the campus. Now, startup Cartken is working to produce a larger fleet of rovers to make even more deliveries in the coming weeks.

The university’s senior director of dining services said in an interview with Ohio State News that they put this plan together with two goals in mind. First, the university wants to ease  the cost of delivery. Secondly, the robots can bump up how quickly food gets to students.

Food delivery service Grubhub announced it will be entering the partnership this fall as well.

“The partnership with Cartken for autonomous robot delivery builds on Grubhub’s existing campus offering and is a seamless fit for campus environments, which are notoriously difficult for cars to navigate,” said Grubhub in a press release.