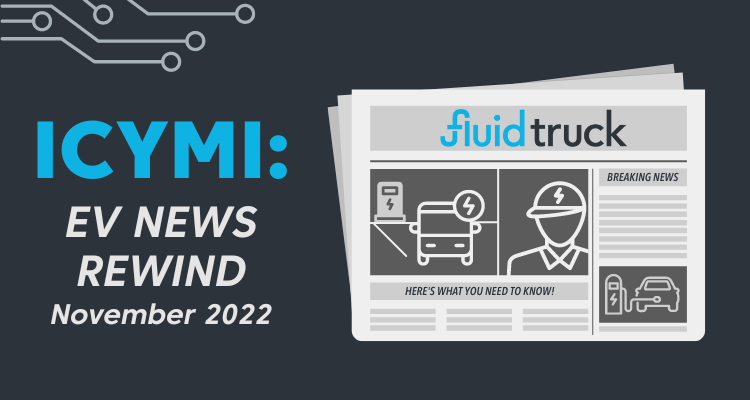 As we roll into the month of November, it’s time for another edition of the EV Rewind! This month we are filling you in on the EV truck that sold out in just 15 minutes, BMW’s latest plans to produce more EV batteries in the U.S., and autonomous trucking technology that’s hitting some Texas interstates.

Were you hoping to get your hands on an electric pickup truck? The GMC Sierra Denali is the latest truck people are racing to reserve.

GMC’s full-size EV pickup truck sold out just 15 minutes after it debuted. The truck, which had reservations open for early 2024, has a $107,000 price tag and is a limited edition. When we say limited edition, we mean fewer than 10,000 were produced, according to Fox News.

The reservation only required a $100 fully refundable deposit. A more affordable base version of the truck is expected to be available later in 2024, starting around $50,000.

BMW announces plans to invest $1.7 billion to build EVs and batteries in the U.S.

This month, the German automaker announced how it plans to expand through investments in the U.S. It is set to be split up with $1 billion for the production of EVs at the company’s South Carolina plant, and the rest going to a brand new, high-voltage battery plant in Woodruff, SC.

The new facility will be more than 1 million square feet and will offer up 300 new, on-site jobs. The company said in a news release it will build at least six full EV models in the U.S. by 2030.

The company also says it will purchase battery cells from Envision AESC, based out of Japan, to supply the BMW plants. Not long ago, the German automaker announced plans to construct four new battery cell factories in China and Europe. The company is gearing up for high demand for next-generation batteries.

New to the streets of The Lone Star State: a self-driving semi truck. Kodiak Robotics, a startup out of Mountain View, California, announced the company has partnered with IKEA for the pilot program.

Currently, the semi is making 300 mile delivery runs each day from an IKEA warehouse not far from Houston to one near Dallas. The company’s autonomous driving system is under the hood, but there will still be a professional human driver to monitor the technology and ensure the vehicle’s safety.

“Kodiak’s technology will contribute towards our objective to put the driver in focus in the transition towards automated transportation and towards our road safety agenda,” said Dariusz Mroczek, Category Area Transport Manager, IKEA Supply Chain Operations.

Fluid Truck is also proud to be in a partnership with IKEA, by powering its EV delivery fleets in New York City and Los Angeles. Our software and fleet of EVs allow businesses like IKEA to manage their fleet without the overhead of owning vehicles.

“We are committed to our EV journey as we strive towards the goal of having all last-mile deliveries with zero emissions by 2025,” IKEA’s U.S. country sustainability manager Jessica Keesson told the Denver Business Journal about the partnership.

Now, back to Kodiak – the startup company said the purpose of the program is to get a deeper understanding of how its autonomous driving technology impacts road safety and working conditions for truck drivers on long routes. The founder of Kodiak Robotics said in the news release, “adopting autonomous trucking technology can improve drivers’ quality of life by focusing on the local driving jobs most prefer to do.”

Kodiak said another benefit to autonomous freight trucks is that they use less gas than the standard semitruck, pointing to a study out of the University of California San Diego where researchers found they consume about 10% less fuel.